Korowal Studios offers the opportunity for students in our primary and high school to learn music, singing, yoga and drama at Korowal during and after school hours.

Students from other schools are invited to attend Korowal Studios after 3:30pm.

To make a booking for Korowal Studios please contact the relevant tutor, and where neccessary, your childs' Class Teacher or Year Coordinator to establish the best time for the session to be scheduled. Booking and payment is organised directly between families and the Tutor. Below is a current list of Tutors for Korowal Studios and their contact details.

I am a professional singer with over 20 years experience. I was raised in Wollongong and
lived in Sydney in my 20s and moved to Blue Mountains with my partner and kids in 2014.
For as long as long as I can remember, I have been drawn to music and interpreting song.
My two older sisters are also singers, and as children, we loved to pass the time singing
our favorite songs and working out harmonies. Through out my own schooling, I performed in many a choir and talent show. I began learning guitar at 15, as a way of having my own accompaniment, which grew my interest in songwriting. From the age of 16 I have performed my own songs and covers in various venues all over Wollongong, Greater Sydney and the Blue Mountains. I have recently completed studying a Bachelor of Contemporary Performance majoring in Voice, at the Australian Institute of Music (AIM).

My goal, as a vocal coach, is to pass on my knowledge and experience as a performer/
singer songwriter, while helping to nurture my students individual style… And have fun!

Eugenie is an experienced Pianist, Accompanist and Teacher, holding a Bachelor in Music Performance and a Masters in Music Education. Eugenie is currently a teacher at the Australian Institute of Music and is accepting students through Korowal Studios of all ages and levels for tuition in classical and popular styles, Music Theory & ear training, AMEB, Trinity, ABRSM exams, or to play for fun and learn to improvise.

For more information or to book contact: eutampl@gmail.com and to see more about Eugenie visit her profile at

I am a classically trained violinist with six years teaching experience. I have spent the last three years studying the Suzuki Method and am about to become an accredited teacher.
The Suzuki Method is a wonderful way to bring music into your lives and the lives of your children. Find out more about the Suzuki Method at www.suzukimusic.com.au

Please contact me on 0403023268 or elaineox@gmail.com so that we can discuss your child's needs in more detail. 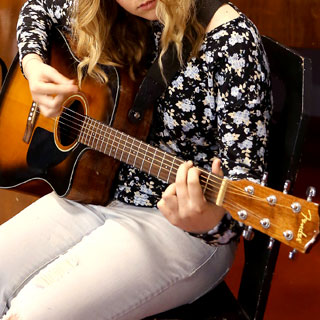 I am a multi-instrumentalist, composer, music producer and professional teacher since 1987. At Korowal I will be offering inspirational tuition in guitar,bass and mandolin. I have a wealth of experience working with students of all ages and have run courses for NSW Department Of Community Services, music centres and schools.

As a musician I have played with over 30 Australian bands including Matt Finish and more recently our own Blue Mountains based SideShow Annie. Over the years I have played specialist roles in the Australian Queen Show (as Brian May), the Australian Cure Show and the Australian Yes Show (as Steve Howe). I have toured with performers such as the Beach Boys (USA), Gerry and the Pacemakers (UK), INXS, James Reyne, The Choir Boys, Noiseworks, Mike Caro (Gloria Estefan, Michael Jackson, Erasure), Spy V Spy, Paul Wheeler (Icehouse), Rod Ford (Crossfire/Galapagos Duck),Vanetta Fields (John Farnham), Harry Bruce(Australian Crawl/Renee Geyer/Leo Sayer) and Harry Manx (USA).

My music has been published by Warners/Orient Pacific/Alberts since 1991. I have released CDs both independently and through BMG. I have composed for Home and Away, major Hollywood film libraries, Cannes Film Festival films and Western Sydney University educational releases. I also run SongCave Studios – Lawson recording studio where I record and produce my own and other artists' music. In addition I run open mic nights across the Blue Mountains and have an excellent reputation/rapport with musicians far and wide.

A Winston Churchill Fellow, concert pianist, artistic director and music educator Grace Kim believes that quality live music should be accessible to everyone with a desire to hear it. Among her numerous international and national prizes, the former child prodigy was the National Keyboard Winner of the 2000 Symphony Australia Young Performers Award, also receiving the Queen Elizabeth II Silver Jubilee Trust.

Grace has performed to numerous international dignitaries in some of the most illustrious concert venues in the world such as Het Concertgebouw, De Doelen, La Salle Philharmonique de Liège, as well as the Sydney Opera House. Many of her performances have been broadcast on radio and television. In 2006 she performed before Her Majesty Queen Beatrix of The Netherlands and Australian Governor General Major General Michael Jeffery at 400th anniversary celebrations of Dutch-Australian contact. In 2012, Grace performed before 200 international diplomats and ambassadors in Canberra hosted by the Korean Embassy, as well as in Parliament House for University of Melbourne 150-year celebration. She has also performed several times at the NSW Government House including at the Winston Churchill Fellowship’s 50th Anniversary National Convention before dignitaries.

A mother of two young children, she is an advocate for music education. She founded Sensory Concerts to provide quality classical music concerts for families with sensory/special needs. Grace was recently selected as a national finalist in 2018 AusMumpreneur Award in 2 categories: Making a Difference, and Big Idea Award.

This year Grace also made her debut as an author, with "Noah's Story" written together with her son, about life with Asperger's Syndrome. The book is available on Australian and international online bookstores such as Amazon, Barnes & Noble, Wordery, Book Depository.

Grace Kim currently teaches in the Rising Stars Program at the Sydney Conservatorium of Music and is founding artistic director of Mountain Concerts and President of Your Music Inc.

I am a multi-instrumentalist, composer, music producer and fully trained and qualified teacher. At Korowal I will be offering creative tuition in kit drumming, saxophone and clarinet. I also hope to run band workshops where musicians play in groups to develop repertoires for performance and eventually recording. I have a vast experience in working with students from Primary to HSC level.

As a musician I have played in many of New Zealand and Australia's more eccentric bands including Darth Vegas, The Jews Brothers, The Mutton Birds and The Spines. With these and other bands I have released many records and toured extensively around New Zealand, Australia, Europe and America. I have also composed many TV, film and theatre and soundtracks, two of which have received awards.  I now run a recording studio where I record and produce my own and other composers music. Helen is a mum and a professional Yoga teacher with over 15 years experience. To  mfind out more about what Helen is doing visit http://www.helenlaird.com/

Reconnect with the natural movement of your body, find your strength and rediscover your flexility. (And arrive at pick-up feeling recharged and relaxed!). Classes suit all experience levels.